Hi today I’m  pleased to be a part of the Blog Hop featuring Chris Aubrey and Cecilia Aubrey. Their book is part of a set called Eight Nights with a Hero.

Wow, that sounds like a great way to spend eight nights. Especially this time of year with the long cold winter nights settling into some parts of the world.

Cecilia and Chris’s book is entitled Counter Measures. It’s about an ex-CIA agent named Cassandra James. Here is an excerpt to tease your senses. Buy links for the boxed set are below but first here’s the excerpt and a little bit of information about the two authors who wrote the book Counter Measures.

Writing had touched Award Winning Authors Chris Almeida and Cecilia Aubrey in different ways through the years but had never taken flight until 2010, when Chris and Cecilia met and began role-playing online as a hobby. It was through playing fictional characters in a sort of improv written theater, that writing took a central position in their lives. The transition from role playing to novel writing was smooth and they attribute the ease of writing realistic characters to their ability to live the scenes ‘through role play.

Chris and Cecilia have since chosen to release all their titles independently. They have several short stories and two novels published under their own label, Éire Publishing, and are vocal supporters of independent publishing done right. They are currently working on the next novel in their series. Through all the chaos and laughter, they still hold true to their roots, bringing their favorite role-play characters and stories to life. Website | Facebook |Twitter | Newsletter

I think that’s interesting that your role play game brought you to write novels. I’ve heard that for deep characterization role play games are excellent ways to learn. 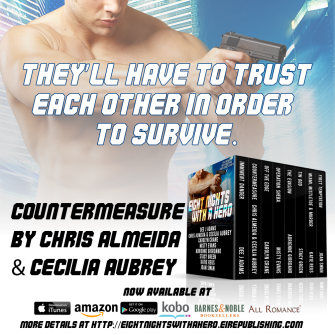 In the first novel of the Romantic Suspense series, tenacious ex-CIA agent Cassandra James is in hot water. A cyber thief stole sensitive information from her father’s top client – information she was supposed to keep secure – and now she could lose her job, even if she is the boss’ daughter. The only person who can help her recover the stolen data is sexy NSA analyst Trevor Bauer – a computer mastermind who’s broken through her personal security and might break her heart as well.

Trevor is on the hunt for answers to the mystery surrounding his parents’ disappearance. Following a promising lead into the missing Bristol files, he accidentally gets on the radar of a woman too hot to handle…and a mercenary willing to do anything to keep both of them from recovering those files.

To track down the thief, Trevor and Cassandra must embark on a harrowing adventure that leads them across the ocean and into a world of intrigue, danger, and passion. But as they close in on their target, their relationship begins to boil, jeopardizing their mission as well as their very lives. Will they learn to trust their instincts – and each other – in order to survive?

The silence between them had grown to an unbearable level. As they walked out of the elevator toward their rooms, Trevor, unable to contain his thoughts any longer, voiced them. “You don’t care one bit about me.”

Based on her quick reply, Trevor saw Cassandra knew exactly to what he was referring. “I told you already, I didn’t have time to contact or come back for you. We would have lost her. Days of surveillance down the drain. It was a miracle I ran into her in the first place.”

Trevor was quickly losing patience at her refusal to accept that following Allison without back-up had been a mistake. “All I expected was the courtesy of you telling me you were off trailing Allison so I could back you up.”

“You need to stop being obsessive about this. I did what I thought was right. I found her and came back for you. I wasn’t going to leave you there all night.” She looked at him with angry narrowed eyes. “You know what? Forget it. I don’t need this. I had to put up with the same possessive attitude from Nate. Neither of you own me.”

“Cassandra,” he said calmly. “This is not just about you not letting me know right away what was happening. You have to understand that this is about you going off on your own. You could have texted me. I’m your partner in this. I would have followed to give you back-up and, in the end, we would have saved time.”

Without a word, she turned her back to him and headed for her door. Before she could reach it, Trevor grabbed her arm and pinned her to the wall. Cassandra struggled and Trevor groaned inside at the feel of her body pressed tight against his. “Damn it, Cassandra. Hold still for a second.”

Her heart drummed rapidly against his chest and he saw her pulse beating at the base of her throat. He didn’t like using his size against her, but he needed her to understand. “This is not about obsession, and I sure as hell am not like your friend, who, by the way, sounds like an ass. This is about friends caring about friends. You said you wanted us to be friends. You wanted us to be a team, and yet you took off and never checked back with me. The next thing I knew, almost an hour had gone by and I had no clue where you were. We know there is something bigger happening behind the scenes, that Allison didn’t act alone. What if you had been hurt?”

“I’m a big girl. I can take care of myself,” Cassandra breathed hard in agitation, and bucked against him, still trying to push his body away.

Trevor banked the urge to press harder against her. He continued to pin her arms above her head and put some space between them. “I know you can take care of yourself, but friends are going to worry about your well-being, whether you want it or not—whether you like it or not.”

Trevor grew distracted by the feel of Cassandra’s sweet breath against his skin and leaned slightly forward. “All I’m asking is that you let me know next time so I can be there for you. With you.”

By the time he finished his statement, his lips were mere inches from hers. His mind went into overdrive and the need to taste the texture of her lips overrode his common sense. When her lips parted to protest, he silenced her by capturing her mouth with his.

The kiss made him numb to his surroundings. His sole focus became the softness of her full lips and the mingling of their tastes. Slowly, he released her hands and cupped her face with his, deepening the kiss. A jolt of electricity hit him when she responded, kissing him back just as urgently. Her freed hands gripped his forearms tightly and the kiss grew hot and deep—tongues exploring, teeth nipping.

In a flash, Cassandra pushed him from her. Both froze and stared into each other’s eyes. Before he could comment, she slipped into her room and softly closed the door between them. Trevor stared at the door and ran his fingers through his hair. His arms felt empty without her. The taste of her on his lips was sweeter than he had ever dreamed. It only made him want her more and filled him with a desire to taste her over and over again.

Wow what a tease.

Cold Nights, Hot Heroes, and Eight Deadly Secrets…
Snuggle up to 8 riveting Romantic Suspense stories involving 8 Hot Heroes from all walks of life who will do anything to protect those they love.

PLEASE NOTE: This box set will be available only through January 31, 2015!

“Amidst the heartwarming and beautifully written love story was a very cleverly and intelligently constructed suspense and mystery.”

“Off the Edge is such a well-crafted romantic suspense story. Full of action and sparkling chemistry between Laney and Peter, this book is so much fun to read.”

“Evans takes readers on an edge-of-your-seat thriller into the secretive world of CIA operatives. A love triangle and a mole in the agency make this one story you won’t want to put down.”

Adrienne Giordano, USA Today Bestseller
THE EVASION (Justifiable Cause Series Book 2) – The World Of Knock-Offs Isn’t As Frivolous As It Appears.

Stacy Green, Best Selling Mystery and Thriller Author
TIN GOD (Delta Crossroads Series Book 1) – The Truth Can Be As Deadly As Any Weapon.

“Stacy Green has written an emotionally charged, thought-provoking and stunning mystery/suspense that will capture and hold you hostage until the last page is read.”

“Well written and a beautiful addition to an interesting series, Miami, Mistletoe, & Murder is a great read to keep you warm on a cold winter’s night.”

“I love Joan Swan’s writing as even in a novella she manages to capture the heart of her characters.”

There will be two tour-wide prizes (two winners, US only):

Don’t forget about the Rafflecopter Giveaway here’s the link to enter:b

Follow the Blog Tour to meet all thine authors and read excerpts from the different books in the bundle: http://eightnightswithahero.eirepublishing.com/blog-tour

7 thoughts on “Eight Nights with a Hero”